Architecture and the Russian Avant-garde 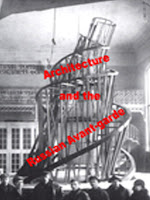 The second film in the series "The Russian Avant-garde" grew out of the first in that Rodchenko phot0graphed many of the new buildings which had been built in Moscow and which were themselves a product of the avant-garde. Through researching Rodchenko I quickly became interested in the Russian avant-garde as a whole and the outline of a second film had already began to emerge before the first was finished. I researched the buildings I wanted to film and

spent a few weeks travelling across Moscow discovering where they were located and how best to film them. I really wanted to show the relationship between avant-garde art and its influence on architectural design of that period. I decided to structure the film around 3 main figures: Tatlin, Malevich and Melnikov. I wanted to start work in April using the same cameraman, Valentin Savenkov, as I used on the Rodchenko film. I also wanted to start in early April as some of the buildings would be hidden by trees once the leaves started to grow. We managed

to get going in late April but because the spring is late in Moscow there was no real problem with leaves on trees. Some of the buildings were suffering from neglect as can be seen in the film but many were in remarkably good condition. Filming on the streets of Moscow is not without an occasional adventure and the Architecture film was no exception. The first problem arose when we wanted to film inside the house that Melnikov had built for himself, a construction of two cylinders inter-cut into each other. Valentin said that maybe Melnikov's son who lives there now would let us film inside. It might seem amateurish, not having planned this before and then suddenly decide to knock on someones door on the off chance that they will allow us to film inside their home but in Russia this is quite acceptable. We r

ang the bell and the gate was opened by an eighty year old man who was Melnikov's heir and son. Thin and wiry, he looked at us with a quizzical expression of curiosity and annoyance. Valentin explained the situation and then let slip that the film was about constructivist architecture. I knew this was a mistake and I was not making a film about constructivist architecture in any case. Melnikov's son looked at us with a hurt expression in his eyes, saying, in an pained tone of voice, "Papa wasn't a constructivist - Papa was an artist". That was it, I knew we weren't going to get in under any circumstances. I went back a few days later by myself and tried to negotiate with him but again it was no good. I could see he was tired of film crews and people wanted to look inside the building all the time.

Later there was a building which I wanted to film not far from Lubiyanka. It was a government building and I had already spotted a policeman standing nearby but before I could warn Valentin he had the Betacam out and up on the tripod. The Policeman waved his baton at us and Valentin took the camera off the tripod and we moved on. All in all it wasn't a good day and I didn't get everything I needed.

I was filming a building in a quiet region of Moscow and gradually I could feel that people were checking out what I was doing. I had feeling someone would call the police. I just got everything that I need filmed and in the distance I could see a police car coming down the road. Fortunately I already had the camera packed away and was walking up the road towards were they were coming from and they drove straight past me. They stopped at the building where I had been filming and out of the corner of my eye I could see they were speaking to some one who came out of a building opposite. I dodged quickly into a small road between two buildings and walked quickly to the metro where I was able to blend in with the crowd.

The following day I went to Red Square to shoot some material. There I could happily pose as a tourist and remain relatively anonamous. Or so I thought. It was a very hot sunny day and I began filming around the Moscow Museum which faces onto Red square and Manezh square. If you have been to Moscow, Manezh square has an enormous statue of Marshall Zhukov on a horse. Within minutes I was surrounded by a group of homeless guys who wanted to know all about the project and spoke knowledgably about what were the best angles from which to film buildings. "We know everything about this place, we live here" which of course they did - literally on the streets. They probably wanted to help me for money but I did get the distinct impression that the just wanted to help me because they were genuinely interested in what I was doing. I talked to them for a while and then moved on.

A friendly faced thin middle aged man with a sun-burnt face, then stopped me and asked me to film him. "I've just spent twenty years in prison and I have come to Red Square on my first day of freedom. Take a picture of me so that there is something to say that I have existed".

He smiled amiably as I filmed him and then we parted. Five minutes later we bumped into each other and smiled foolishly at each other. Fifteen minutes later, again we bumped into each other, in a different part of the Red Square complex. We both stopped and he said to me "this is the third time we have met, lets exchange coins". He gave me one ruble and I gave him one ruble from my pocket. "You're a good guy" he said and we shook hands and I never saw him after that. I don't know what the significance of exchanging coins is but it seemed very important at the time.

One of the main components of the film is the computer graphics. I had never worked with computer graphics before but I thought for a film about architecture it would be appropriate. I found a guy called Vladimir Sokolov who was recommended to me by a friend and I explained to him what I wanted to do. We worked out some simple story boards and he came up with what I think are some interesting graphics of Tatlin's Tower and Malevich (see videos below) plus some others.

The film was complicated by the fact that I needed to change studios half way through the editing process and this led to a lot of delays. At that time I was less familiar with studios in Moscow than I am now and more or less had to go on other peoples recommendation's. The studio I found was alright but I didn't want to make another film there. Once the film was completed I was contacted by the International Festival of Cinema and Technology to submit the film for participation in their festival which was being held in Toronto that year. They nominated it for best documentary film in the competition but the prize went to another film.