Meyerhold, Theatre and the Russian Avant-garde

The film Meyerhold, Theatre and the Russian Avant-garde, grew out of the Mayakovsky film.
Meyerhold's task was to combine the three dimensionality of the actors body with the flat two dimensionality of the set design. In order to solve this problem he turned to the developments in the graphic experiments of the Russian avant-garde, people like Popova, Rodchenko etc. He also wanted to move away from a theatre based on words or text for expressing emotions and ideas, to a theatre based on gesture and movement in order to create and widen the possibilities for creating an emotional atmosphere in any given play. For instance Chekov wrote(roughly speaking) for one type of theatre which was actor/text based.

Meyerhold's productions included influences from Kabuki theatre which is based on mime and dance, the action developing around a series of gestures and poses as much as a result of the text of the play. With both of the above in mind, Meyerhold developed a specific training technique for his actors called biomechanics. 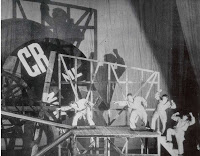 construction almost like a machine in motion. The actors deprived of any make up or costumes struggled to find their feet in this unusual set construction. Here however Meyerhold's training of biomechanics helped and both actors and set were synthesised into one grand machine moving in unison to the rhythm of Meyerhold's direction. In order to show how Meyerhold achieved this in a documentary film it was decided to use actors to "recreate" Meyerhold's techniques.

A simple solution was devised of filming the actors performances as shadows. We shot the shadows with an English actor in Moscow who had previously studied at the Moscow Arts theatre. We weren't quite sure how to go about filming biomechanics so we improvised using the knowledge that we had. The idea of the shadows was to make the presentation more abstract and less concrete so that the emphasis would be on the movement itself rather than the person. This, as far as I understand was echoing some of Meyerhold's ideas. Once again I asked Slava Sachkov to film the sequences of shadows.

After a long and torturous route this film has finally been completed and released on Amazon as DVD. It is the sixth film in a series about the Russian avant-garde by Copernicus Films and the director Michael Craig. The film took longer than expected for many reasons. Firstly it was necessary to interrupt the editing to finish the film David Burliuk and the Japanese Avant-garde(Also part of the series). secondly when it came to editing the material it was obvious that there would be a need to shoot more material. Also in a strange sense I wasn't sure how the film should look or be. After making four films about the Russian avant-garde where the style was relatively similar, now I was confronted with a set of material and a subject which required a different approach and a different look but at the same time should integrate with the over all series. For this reason I embarked on finishing David Burliuk and the Japanese Avant-garde and leaving the editing of Kandinsky until later.

As it turned out this was a good idea. When I returned to the Kandinsky film I had fresh ideas which were incorporated into the film. One of the central ideas of the film was a sequence where Kandinsky enters his studio and is struck by the sight of one of his paintings bathed in rays of light. He doesn't know whether the painting is upside down or what the painting is supposed to depict. It was at this moment that Kandinsky took a leap forward in his search for abstract forms in art. In the editing of this sequence all the threads and various elements of the film came together.

The idea was to show the state of Kandinsky's consciousness at the particular moment of illumination and to illustrate the accompanying transformation in his consciousness. How Kandinsky's understanding of his own art transformed itself qualitatively to a new level.

From here the film became much easier to edit and eventually complete.