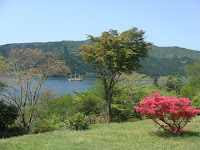 After we got back from Nikko it was just a few days before gearing up for Hakone. In between times I did more filming in Tokyo as well as a unique park outside Tokyo. The evening before we were to go To Hakone we met with Akira Suzuki and I outlined an idea I have had for a supplementary film and discussed the idea of doing more interviews with him for this new film.

The next day w boarded a bus early in the morning which took us out to the Hakone region where Mount Fuji is located. I needed some good shots of this feature for the film. When I woke up and looked out the window torrential rain was falling and the forecast was that it would continue all day. Not a good start as this type of weather would insure that Mount Fuji would be hidden in cloud. We had decided to take a normal tour to the mountain which meant enduring a continual commentary from the guide, although I have to admit she was a good guide as far as it goes, its just we had different goals from a tourist who was in japan for the first time. I chose this method of traveling because there was no way we would get up Mount Fuji otherwise. Also I knew that the next day we would be free to wonder all over the Hakone area unhindered and the tour gave us some good deals on local transport plus as it turned out a first rate hotel with stunning views of the lake and mountains.

When we got to mount Fuji, the rain had in fact stopped but as i expected the whole mountain was shrouded in mist. Occasionally there would be break here and there but it wasn't working at all. Nonetheless the feeling of being halfway up sch a magnificent natural feature was palpable and I we felt the full force of the incredible sight of the snow peaked volcanic mountain. Beautifully formed, if the weather had been better it might have felt like just a illusory few short steps to the top. Even though we were surrounded by snow at the fifth station, as its called it didn't feel cold. A half an hour was all we got and then it was back on the bus and down the mountain for lunch. Then out to Hakone. It took about another hour and a half to get to the lake which is in fact a collapsed volcano crater.Everyone was bundled into a cable car at the foot of some mountain and we started an assent. Suddenly there it was. The weather had cleared and mount Fuji appeared in all its glory as if floating like and island in a sea of clouds. I knew the next day was going to be clear and sunny so I would get some good footage anyway but the emotional intensity of the view was worth the wait.

We descended to the lake again and we thankfully parted company with our guide and the rest of the group and were taken by a shuttle to the hotel was a couple minutes drive away on the shores of the lake. The hotel was a real find, quite luxurious but not expensive. We had a meal in the restaurant overlooking the lake and then went for an on-sen (volcanic hot spring bath). The on-sen was divided into too sections one for men and one for women. Both were outside bit only the men's section had a view of the lake. As I sat alone in the steaming pool and gazed out across the lake lit by a stunning full moon I began to feel I was gaining some gradual insight into what the medieval Japanese painters and poets were getting at. A peaceful end to a dramatic day.

The next morning we were up early and straight to the on-sen again to set us up for breakfast. Breakfast was an extensive layout of everything from fruit, salads, bacon eggs, rice soup etc, and good coffee. We didn't really want to move from the great view of the lake and the fantastic food but we weren't here just for our health and a days work was beckoning.

The first stop was the Hakone Botanical Garden which Natasha wanted to see. A long hot walk to the bus station and 15 minutes later we were at the cable car to take us up to the volcanic hot spring area. This is an area of Hakone which is still active with hot steam rising out of the water which boils on the surface. The main source of income is boiling eggs in the pools and selling them to visitors. The eggs turn black from the sulfur in the water. More shots of mount Fuji and then further and further up the mountain by cable car to the top and down the other side.

With each stop there is something interesting to look at, either a museum or art gallery or some strange natural feature. It seems to work on the secularised principle of a pilgrimage sites on a set route which were once the mainstay of the Buddhist religion in Japan. 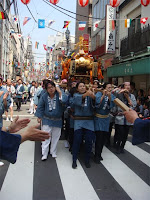 By late evening it was already time to make our way back on the mountain railway branch line to Odawara and then on the Shikensen back to Tokyo.

The next morning we were up early for the local kanda matsuri festival of carrying shrines around the streets where our apartment is located. Noisy and hot all day but we followed it for most of the time. So much so that when the locals stopped for a break for cold drinks they offered us a drink as well.
on May 16, 2009