Today in Shinjuku was one of those days were you start to understand what you are doing how it will work and things will fit together. Its a rare experience which perhaps has something to do with the weather and wont last long but its a good feeling all the same. We spent almost the entire day filming in Shinjuku Goen park. Spectacular sight of cherry blossom in full blaze. Its very difficult to escape at the moment but all the same its an incredible sight. I'm not usually one for the postcard visions of a country but experiencing the cherry blossom in Japan is an unexpected delight and goes well beyond the cliches of cherry blossom romantic vision of Japan. 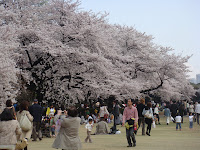 There is a genuinely spiritual meaning to the festival in that the fleeting appearance and disappearance of the blossoms represents or embodies the fleeting character of life itself. Most of the footage I am getting at the moment will fill in gaps which will have a qualitative effect on the over all direction of the first film which is centred around traditional Japanese art. In many ways at the moment there is nothing new coming in just a building up of layers and shades to add depth to the film. When engaged with any film or any project for that matter, when you start, it takes some time to reach an understanding of the outer parameters. In other words the limits within which the film will be formed. These limits are never actually reached as any creative project is forever in the stage of formation but at some point you do get a sense of what that territory will be. With these two films I don't think I have reached that point. As I film and collect material here in Japan those limits and that territory is still in a significant state of flux.

The same thing was true of the series The Russian Avant-garde - Renaissance or Revolution whereby I was never really sure with each film and the series itself whether I was coming to the end or beginning a new phase of the series. It was only after the six films were completed that I felt as if the outer parameters of the project had been reached.
on April 07, 2009 No comments: 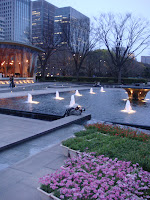 Several days of filming around Tokyo. Mostly general stuff but at the same time bearing in mind the archive footage I already have and how the archive footage might be integrated with contemporary scenes of Tokyo. This will hold true for the traditional film and the contemporary film both of which will make up the project. Filming and writing almost simultaneously which is a very new sensation. I have already done a considerable amount of research leading up to this trip but there is nothing like being in the field so to speak and seeing how things actually are on the ground and in reality. Have been spending time with Akira Suzuki who gave me a copy of his new translation of David Burliuk's book about Siberia. Its about the fifth or sixth book he has translated of Burliuk's work - its just a shame that I don't read Japanese. Information about Akira Suzuki can be found on my web site as well as an interview with him in my "David Burliuk and the Japanese Avant-garde" the fifth in the series "The Russian Avant-garde - Renaissance or Revolution".
At the moment its the cherry blossom festival in Japan so I feel a bit dominated by it but at the same time I am looking at other things which are going on around Tokyo. In some sense I am still finding my feet and trying to get into some kind of rhythm. Kyoto was much easier because we had a short space of time in which to fit everything in and so we were quite focused. Here in Tokyo things are a little bit more open ended and so it requires more discipline. Some of the evening material looks interesting although I haven't had a chance to look at it all.
on April 05, 2009 No comments: