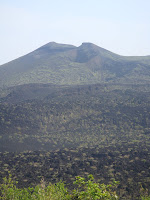 We arrived on Oshima slightly the worse for wear after a musical evening with some friends of Akira Suzuki the night before where we consumed large quantities of Japanese food and drink. I slept for most of the time on the hi speed boat which took us out there. We were met by the curator of the Goro Mikura memorial Museum of Traditional Peasant and Folk Art, Mr Fuji and he took us straight to the museum to do some quick filming and for to get acquainted. Mr Fuji's father was an artist who kept alive a unique folk tradition of wood sculpture indigenous to the island of Oshima(more about this later). Then we went up to Mount Mihara to film the volcano. We didn't seem to be getting as close as I wanted(Its not active - last eruption was in 1983 and Mr Fuji was part of the team of fire-fighters and rescuers drawn from the local population). We drove around for bit more and then Mr Fuji turned off the road and onto a black lava dust trial which open 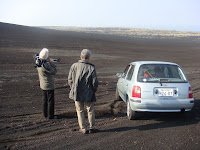 ed up into an enormous expanse of lava dust stretching for miles all around us. We spent an hour or more here and then roamed around the island looking at various things of interest and finally returned to the museum around 6 o'clock. Then we walked a short distance to our hotel which was a typical family Japanese hotel with Japanese style rooms and incredible views of the mountains and volcano.

The next day we were up early and headed out for some more locations in and around the main town including the hotel or at least the site of the hotel in which David Burliuk stayed in 1920 when he came to Oshima. A lot has obviously changed since then but it is still a unique feeling that you are following in the footsteps of one of the great artists of the 20th century and featured in the film "David Burliuk and the Japanese Avant-garde", 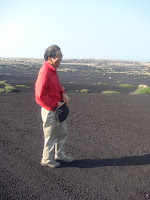 which we filmed in 2004/5. David Burliuk wrote a book about his time on the island simply called "Oshima" which Akira Suzuki has translated into Japanese. After lunch we filmed an interview with Mr Fuji along with Akira Suzuki. We left Oshima about 3 PM on the Jet Foil and got back to Tokyo early evening where we had a good meal to finish off the trip.
at 06:51 No comments: Links to this post

Finally getting somewhere with some of the more complicated locations that need to be organised, namely Nikko, Oshima and Atami. Akira suzuki with whom I worked on the film "David Burliuk and the Japanese Avant-garde" has invited us to go with him to the island of Oshima. Its one of the first Islands Burliuk visited when he came to Japan. Akira Suzuki wll introdcuce us to the curator of the island museum and I will film as much as possible. It takes a few hours by boat to get there so we will stay overnight and come back the next day. We have also finally got the trip to Nikko settled as well. Nikko is a small town at the entrance to Nikko National Park. It also has one reputably of the most beautiful waterfalls in Japan. All the same everything depends on the weather.