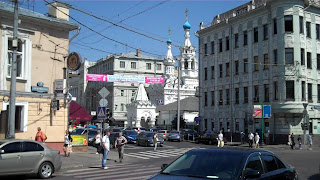 Getting closer to finishing film "Stanislavsky and the Russian Theatre". No major adjustments required but all the same a lot of work straightening out minor details and mistakes. All my time has been taken up with these tasks so I have had my head buried in the film, leaving no room for anything else. I showed a more or less complete version to Paul Fryer and Andrew Eglinton at The Stanislavski Centre. They have made some suggestions about marketing the film and pushing it and there are preliminary discussions about a showing of the film which would in effect be a premiere. They are looking into the possibilities of venues. Moscow is once again blanketed in snow after we thought that we had seen the end of it and spring had started.

In many ways I feel I am holding back until the film is absolutely ready before launching into marketing and promotion and articles about the film. I have a lot to say but I need to say it first in the film. Then we will see what happens. There is much talk these days of marketing your film and thinking about distribution and promotion well before the film goes into production and during the production. People like John Reiss, Ted Hope and Chris Jones and many others have been emphasising the need for this stage.

John Reiss proposes a special new post on a film specifically devoted to distribution and Internet marketing as part of the film production process. In many ways I am in complete agreement with them. However I still believe the film is the thing.  That is not to say that I have not been actively engaged in this sphere. With this film I have teamed up with The Stanislavski Centre, which holds the biggest Stanislavsky archive in Europe, outside Russia and they have many connections and outlets in the world of theatre.  I have a site devoted to Stanislavsky and theatre which is intended to be resource for the film to stimulate and promote interest.

However I agree with Seth Godin if I understand him correctly, when he says that in the end you have to create something which can be marketed and you have to get down and do that no matter what. The question in the context of  a film is which bit drives the other. Does the marketing/promotion/audience gathering drive the film or does the film drive the marketing promotion/audience/gathering or is this a false dichotomy? As I said at the beginning there is a lot of things to say but the core is the film and I think that needs to be in focus all the time if you are trying to do all these things yourself simultaneously. Once the film  is released I might have more to say about these aspects.

One of the things I want to do when this film is over is finish the book I have written "Journey to Ogasawara". The book is completed but just needs editing and put together for publication. All in all I have been thinking about writing more - trying to find more to time to write and dovetail it with the films I have been making.
on March 13, 2011

Email ThisBlogThis!Share to TwitterShare to FacebookShare to Pinterest
Labels: Stanislavsky